Through its collaboration with the Volcker Alliance, Heinz College is finding new ways to use government data to help inform policy and strengthen its students’ experience.

Arrest records and trial verdicts. Earthquakes, hurricanes and landslides. Every 911 call placed in the last year. The number of Americans that went to the emergency room for an injury sustained in an inflatable bounce house in 2013 (it’s 551, by the way). The cause of every single recorded death since 1999. The government has more data than it even knows what to do with, but academic researchers have more than a few ideas.

“Existing datasets can solve problems,” Karen Lightman said to a group of leaders in government, industry and academia in a roundtable discussion at Heinz College earlier this month. As Executive Director of the Metro21 Smart Cities Institute at Carnegie Mellon University, Lightman is an expert on the importance of data-driven policy decisions. “The question is how we put it in the right hands to use it for the greater good.”

This is just one of the reasons that Dustin Brown, the Deputy Assistant Director for Management at the U.S. Office of Management and Budget, took a six-month sabbatical to pilot the Volcker Alliance’s Government-to-University (G2U) Initiative. The Volcker Alliance is a nonpartisan, nonprofit organization that advances the effective management of government to achieve results that matter to citizens. It was founded in 2013 by Paul Volcker, the former Chairman of the Federal Reserve under Presidents Jimmy Carter and Ronald Reagan and former Chair of President Obama's Economic Recovery Advisory Board. Known for his pragmatism, Volcker is widely regarded as one of the foremost experts on American economics, and in 1983, he received the Senator John Heinz Award for Greatest Public Service by an Elected or Appointed Official.

“One of Paul Volcker’s directives when he founded the Volcker Alliance was that the organization would work to improve education for public service. There’s a generational changeover coming in government—nearly 30% of federal employees are retirement eligible over the next three to five years, and the situation in states and localities is similar—and building a strong pipeline for talent will be ever more critical. The Volcker Alliance launched the Government-to-University (G2U) Initiative with that goal in mind," said Thomas V. Ross, president of the Volcker Alliance.

This is why the Volcker Alliance engaged Dustin Brown to help lead the first phase of the G2U Initiative, which focuses on building connections between government and universities to strengthen alignment on recruitment, skills development, and research. “An effective government requires great people and smart management practices,” Ross further explained.

In addition to strengthening the quality of professional education for public service, the G2U Initiative seeks to extend the Alliance’s mission by facilitating more effective collaborations between the various levels of government and universities. To accomplish this, the Volcker Alliance has partnered with Carnegie Mellon University’s Heinz College of Information Systems and Public Policy, the Federal Executive Boards, Mid-America Regional Council, the Robertson Foundation for Government, the Lab at the United States Office of Personnel Management, the University of Kansas School of Public Affairs and Administration, the University of North Carolina at Chapel Hill School of Government, the University of Texas at Austin Lyndon B. Johnson School of Public Affairs and the United States Office of Management and Budget to organize four convenings in Pittsburgh, PA; Chapel Hill, NC; Kansas City, MO; and Austin, TX.

As the first stop in the G2U Initiative’s four-city tour, Heinz College co-hosted a series of round-table discussions on overcoming the skills gap and increasing the talent pipeline to government careers. Over two days of networking and learning, participants shared successes, voiced concerns, formed important connections and generated plans of action. On the second day, these lively sessions culminated in a workshop on overcoming the barriers to data-driven research collaborations between the government and research institutions.

“There’s always a choice that needs to be made about which questions need to be answered. In the best-case scenario, the government is making that decision in conversation with researchers,” Brown explained at the beginning of the session. “But there is no universal framework or mechanism for getting that conversation started.  Our main goals for this initiative are to help government and universities begin to form the relationships that improve the hiring pipeline into government, as well as strengthen the understanding of each other's perspectives on research.  If successful, this should improve the effectiveness of government overall through both improved talent and practical research," said Brown. 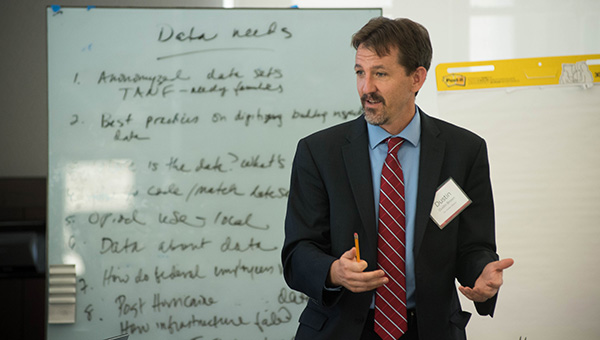 Thus, through their G2U Initiative, the Alliance is working with Heinz College and other leading research institutions to open these lines of communication.

“We are establishing the best practices in connections between governments and universities, and our model is being replicated across the country,” said Jackie Speedy, Associate Dean of the School of Public Policy and Management at Heinz College and an attendee of the G2U Initiative sessions at Heinz College. A graduate of the Master of Public Management program, Speedy attributes the Heinz College’s success in setting the tone for these collaborations to its willingness to span boundaries.

“What puts us out in front and will continue to do so is the fact that Carnegie Mellon is inherently interdisciplinary. There are low barriers among departments and colleges here. Heinz students take data science, design thinking, ethics, behavioral economics and traditional social sciences. Our professors co-teach in the schools of design and ethics,” said Speedy. “We understand that in order for government to be innovative, it has to be interdisciplinary. So, the government looks to schools like Heinz to set the tempo for what’s coming next.”

According to Distinguished Service Professor Christopher Goranson, government and university collaborations are a two-way street. As a former Presidential Innovation Fellow during the Obama Administration, Goranson brings a unique perspective on the ways in which the government and researchers can produce mutually beneficial work.

This spring, Goranson will lead Heinz College’s Policy Innovation Lab, where students will be tasked with solving real-world policy decisions through the application of data analytics. This course is a new initiative between Heinz College and the Team Pennsylvania Foundation, a nonprofit that serves as the conduit between the state government and the classroom. Like the Volcker Alliance, Team Pennsylvania is another nonpartisan bridge between researchers and policymakers.

“The advantage of partnering with Team Pennsylvania is that having this third party will help alleviate some of the typical roadblocks inherent to partnering with the government,” said Goranson. “There’s a mutual opportunity for learning on both ends. The Lab will provide policymakers with out-of-the-box ideas to implement in a more agile way. If the university can help policymakers to better understand their constituents and issues, that is a huge advantage. On the other side, this course will give students exposure to actual policy decisions. Without that direct connection, you cannot teach topically."

For example, students in the course might be tasked with the following issue: a state legislature is awarded $20 million to enhance technological training amongst high school students. In order to devise a plan for allocating the funds, participants in the Policy Innovation Lab will analyze data from past policy decisions to determine the best course of action.

However, these research questions aren’t hypothetical – they are directly drawn from actual situations that Pennsylvania’s state and local governments are facing today. This has the potential to directly impact future policy decisions.

“Heinz is unique because it’s combining public policy with information science,” noted Goranson, “and that’s fairly rare. People tend to be well-schooled in one or the other, but not typically both. Having that background is a win-win.”

A framework for the future

During its G2U Initiative sessions at Heinz College, the Volcker Alliance created a space for experts across sectors to form meaningful connections. When one researcher lamented the lack of access to data on opioid usage, a government official sitting right next to him said, “oh, we can give you that!” While it might seem as simple as putting the right people in the same room, the key to sustaining these endeavors is forming relationships, a strategy that Speedy says Heinz has prioritized over the past 50 years.

“It’s like tending a garden,” added Goranson. “You can’t just do it once and check back in a year. It takes regular tending. There needs to be a constant feedback loop, a constant cycle. Especially as administrations change over, it is vital to keep those lines of communication open. By doing that, Heinz puts itself in an important position.”