On Madam Secretary, Téa Leoni stars as Dr. Elizabeth McCord, a resolute college professor, former CIA analyst, and newly appointed Secretary of State who thinks outside the box while balancing international diplomacy with her family life.

Now in its third season, the show, which has garnered People’s Choice Award nods for Leoni as well as in the category of “Favorite New TV Drama,” attracts an average of 11.3 million viewers each week.

“Aside from being a great pitch with great characters and great stories, it provides something that feels really smart, and fits in with what our audience comes to us for,” said Lee Hollin (MEIM ’07), who oversees Madam Secretary.

As vice president of current programming at CBS and CBS TV Studios, Hollin presides over every aspect of shows like Criminal Minds, its spinoff, Criminal Minds: Beyond Borders, The CW’s Jane the Virgin, and the recent SyFy series Incorporated—from ensuring the creative health and strength of each series, to making sure they stay on budget, to promoting them as viable pieces of creative content in the marketplaces where CBS seeks to leverage them. Hollin currently manages seven shows that attract more than 30 million national viewers across three networks each week.

An alumnus of Heinz College’s Master of Entertainment Industry Management (MEIM) program, a joint degree with Carnegie Mellon University’s College of Fine Arts, Hollin started his television career at the Fox Broadcasting Company as an assistant in the current programming department. He was eventually promoted to the manager of Fox’s drama development department, where he made a name for himself in the industry developing one-hour television pilots and new series.

First and foremost, this is a relationship business. Everything is done on an apprenticeship basis. Lee Hollin (MEIM '07)

Hollin was instrumental in developing Glee for Fox and Elementary for CBS—both of which went on to win numerous awards and enjoy long, successful runs. He says that the key to developing a hit show is understanding one’s target audience.

“Every time you hear a pitch, you have to measure it not just on its own creative merit, but on its ability to be an asset for the company at which you work,” Hollin said. “At CBS, we like to have a story engine that lets our shows resolve a closed-ended narrative within a single episode, but also allows for all of the rich character drama that continues to arc out throughout the series.”

Hollin maintains close ties with the MEIM program as an adjunct faculty member, teaching the TV Development Workshop to current MEIM students. He says that a lot of people within the television industry helped him out by answering his questions when he was a student in the program, and that he enjoys giving back to current students in a similar manner.

“First and foremost, this is a relationship business,” Hollin said. “Everything is done on an apprenticeship basis. You learn by doing. You also learn by talking to people who are in the jobs, and I had a lot of that while I was in the program.

“I wanted to be the guy that could give specific insights and information for those people that are interested in television,” Hollin said. “My goal is to give the students a better sense of the organizational structure of television networks and studios, so that they can hopefully make themselves invaluable in those settings.”

That commitment to Carnegie Mellon, along with Hollin’s impact within the television industry, will be recognized during commencement weekend in May, when the CMU Alumni Association will honor him as a 2017 Outstanding Recent Alumni Award recipient.

“Whenever I see other alums working in this business and our paths cross, it warms my soul,” Hollin said. “Patina Miller, who stars on Madam Secretary and is a CMU alumna, is a big part of my life, and her performance is astounding. So I feel a great sense of pride in being a Carnegie Mellon alum, and in my ongoing connection to the university.” 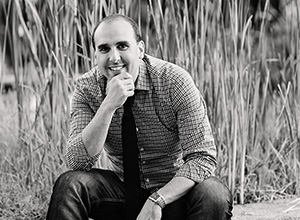