A Heinz Alumnus and IBM use novel techniques to provide access to financial products like never before, creating a more inclusive economy.

Imagine a woman running a grocery stand outside of Nairobi who wants to grow her business. The problem is, she has no credit history. Whether it’s a line of credit, or a personal bank account, citizens in poorer countries often have limited access to capital and financial products that may improve their lives—or even unlock their potential.

A Heinz College alumnus and IBM are working on solving that problem in an ingenious way. Skyler Speakman (PhD ’14) is a research scientist for IBM Research – Africa’s Inclusive Financial Services team. Working out of IBM’s Kenya lab, one of Speakman’s projects involves analyzing cell phone data as a way of determining credit worthiness.

IBM analyzes cell phone usage summaries of about 10,000,000 individuals in East Africa already, and Speakman and his team are currently exploring cognitive computing and deep learning methods (eg. neural nets) to help as they expand into more data sources. Deep learning is a method that is used to train machines by feeding them increasing amounts of abstract and unlabeled data. The method simulates brain activity like the way humans learn as children, but on a massive scale.

Speakman says part of the thrill for him is being able to look at data and make decisions on it that will directly impact people’s lives.

Smartphone adoption has doubled on the continent in the last two years, and there are expected to be 720 million smartphones in use in Africa by 2020 (up from roughly 226 million in 2015). As the mobile economy grows—roughly a third of Kenya’s GDP is transferred through mobile payment systems, for example—it brings unprecedented opportunities to connect people with resources that were previously out of reach.“A successful financial inclusion system allows for an extremely simple financial transaction to enable a higher value transaction in the future,” said Speakman. “With IBM's connections to major banks and telcos around the world, we are able to take this philosophy and turn a chain of digital transactions into a new financial product that otherwise would not exist.”

“If from a democratic standpoint Africa remains stable, and if the economy continues to grow, then the confluence of economic growth, as well as science taking advantage of this deep penetration of mobile phones…will take Africa over the edge into the next millennium,” said Dr. Uyi Stewart, Chief Scientist for IBM Research – Africa (quote at 4:08).

Speakman says that in the past African consumers have typically borrowed from within their own social networks, but when those sources were exhausted, they would turn to less secure lenders (ie. loan sharks). This was not to the consumer’s advantage for a variety of reasons.

“You can’t go to a bank and say ‘I borrowed from my aunt five times and I paid her back regularly,’” said Speakman. He says the products powered by IBM’s credit scoring system will provide greater access to more conventional financial services, like those we take for granted in the industrialized world.

Recall the Kenyan woman running her grocery stand. Previously, her lack of credit would be a barrier to getting any type of financing. IBM’s scoring system can account for her history of transactions in the telecom and mobile money spaces, and then a bank can use that score as an input in their decision to give her a “micro-loan.” Now, she has the funds she needs to upgrade her stock and grow her business.

The system additionally monitors individuals who pay back their micro-loans regularly and subsequently increases their limits.

“Our credit scoring system monitors extremely basic transactions [such as] phone top-ups, or mobile money sent and received, and analyzes them to give customers access to a financial transaction that otherwise would not have happened—a short-term loan,” said Speakman

Historically, the scarcity of financial resources in these communities has inflated the value of cash (and one’s access to it). Now, Africa is moving toward a more cashless, nimble economy that is efficient, secure, and inclusive.

The need for such products is clearly on display. For example, a bank and telco in East Africa partnered with IBM to create one such micro-loan and savings product, and 1,000,000 new customers signed up in the first 70 days. (For perspective, in 2015 there were 5,000,000 total bank accounts in the same region.)

“A 20 percent increase in a few months is pretty impressive,” said Speakman.

‘Skin in the game’

IBM Research has been working to create solutions “In Africa, for Africa” across areas such as education, public health, public safety, water management, and air quality. However, financial inclusion, particularly in rural areas, plays a key role in economic development.

“We've been partnering with local organizations on the continent for almost a century,” said Takreem El Tohamy, IBM’s General Manager for the Middle East and Africa. “In recent years in particular, we've seen how local governments and organizations have been able to leapfrog in technology adoption by embracing the latest innovations such as cognitive systems, cloud computing, data analytics and mobile technology.”

Recently, IBM Research opened innovation centers in Kenya in 2013 and another in South Africa in 2015. The establishment of these incubators will support entrepreneurial ventures, as well as continue to develop skills and competencies in science and technology in those regions.

Of IBM’s 12 global research labs, Speakman remarks that he was specifically drawn to Africa due to what he saw as an outsized opportunity for social good. He remarked that he often gets asked if IBM truly cares about social good or if the company is in Africa just to make money.

“The answer is yes,” said Speakman. He believes social good does not come from zero-margin products alone, and that Africa's biggest challenges—health, infrastructure, and finance to name a few—need sustainable solutions that persist after donor agencies have moved on. He is quick to note that there are aid organizations doing great work on the continent—some of which IBM Research partners with frequently as part of its IBM Corporate Service Corps (akin to the U.S. Peace Corps, but for industry).

“However, the truly successful projects have buy-in from the end-user,” he said. “Skin in the game, if you will.”

Read more about the PhD program 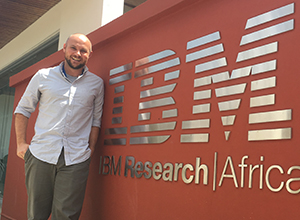