Some people enter the professional world with ambitions of making a global impact. But as a key player in the fight to eradicate polio, Heinz College alumnus E. G. P. Haran (Ph.D. ’77) was lifted to the world stage without ever planning to end up there.

“I didn’t think big in the beginning,” said Haran. “Slowly, I got so deeply involved [in polio eradication] that then it became my commitment.”

Haran is a health consultant with over 35 years of experience in public health. He has worked for such organizations as Rotary International, USAID, and the World Health Organization (WHO), supporting efforts concerning reproductive and child health, family planning, nutrition, and capacity building of NGOs.

But nowhere has Haran had a greater impact than in his work toward polio eradication, particularly in India, Bangladesh, Indonesia, China, Sri Lanka, Nepal, and the Philippines.

The United States has been polio-free since 1979, but in 1988 (when global eradication efforts began in earnest) there were estimated to be roughly 350,000 cases in 125 countries. By 2002, that came down to less than 2000 cases of the virus in seven countries. Haran attributes that success to a combination of sustained routine immunization, effective mass vaccination campaigns, and high quality disease surveillance. These ingredients, paired with the joint commitment of governments, NGOs, religious leaders, and volunteers, reduced wild poliovirus cases worldwide by over 98 percent in 14 years, a breathtaking public health victory.

“Any bright master's student with a good analytics systems synthesis approach could have done [the work I did].” Dr. E. G. P. Haran

Mass vaccination campaigns using the easy-to-administer oral polio vaccine (OPV, informally “polio drops”) were integral to that success. These campaigns could be tailored by country, region, and community to have the broadest reach, and would often involve spiritual leaders and celebrities to raise awareness.

Even then, there would be resistance.

"For hardcore resistors you need to have peers, village leaders…literally field workers from their own community who will go house to house, talk to them,” said Haran.

During campaign days, booths would be set up where people could bring children to receive polio drops, and teams would go house to house looking for children to vaccinate, equipped with a list of addresses and mapped routes (these maps were created using a combination of satellite imagery and “common sense,” according to Haran).

The numbers are staggering, and one can easily recognize these campaigns as the triumphs of operations research that they were. For example, in just one round of national immunization days in India, there were 640,000 vaccination booths, 2.3 million vaccinators, 200 million doses of OPV, 191 million homes visited, and 172 million children immunized.

At one time, India was a primary exporter of the virus—especially the northern central states of Uttar Pradesh and Bihar, where a combination of population density, environmental conditions, poor health infrastructure, and opposition from religious fundamentalists stymied the campaign’s ability to deliver the vaccine.

“There were many unreached populations there, so that’s where the virus continued for a long time,” said Haran.

That word—unreached—is a vital one. Haran said that perhaps the highest priority for any mass vaccination campaign is “reaching the unreached,” an evocative phrase that calls to mind images of remoteness and poverty. Indeed, these unreached populations were largely children of seasonal construction workers, farm workers, or homeless migrants who may slip through the cracks of a national vaccination campaign.

How were these children located? Haran remarks that data analytics played an enormous role.

“When we do polio surveillance, we can’t look for polio, that would require lab confirmation. We look for reports of any sudden paralysis in any children. Every case of suspected paralysis is immediately investigated to collect information about the profile of the child to learn how many doses of polio drops they’d received,” said Haran. Once these children were found, researchers could gather information to create a characterization of who the children were, and these surveys found that many of these children had not been vaccinated.

“Typically, during a campaign you go house to house, but these children don’t have a house, so they aren’t reached by the health system,” said Haran. “We also learned where the migrant children would sleep at night, so we could find them in the evenings and give them the vaccine.”

India went from having 1600 polio cases reported across 159 districts in 2002, to being removed from the list of polio endemic countries in 2012. In 2014, the entire WHO South-East Asia region was certified polio-free.

Dr. Haran was given the Distinguished Alumni Award for his work, which exemplifies the Heinz approach to operations research and service in the public interest

Today, reported polio cases for 2016 number fewer than 30, confined to only three endemic countries: Afghanistan, Pakistan, and Nigeria. Conflict situations and extremist groups in those countries have complicated attempts to deliver polio drops to pockets of children who are most vulnerable to the disease. Those complications range from disruption (intercepting supplies), to manipulation (spreading misinformation), to tragedy (killing health workers). At this point, Haran said that there is little more the outside community can do, that those countries must solve the issue from within.

“Nobody like me going there can solve it. We have to wait to see what will happen,” said Haran.

In the meantime, the spread of the virus is still very much possible, so the world must stay vigilant. In 2014, Iraq and Syria had an outbreak of the disease. That outbreak was quickly contained, but Iraqi leaders wanted to get their medical officers trained in polio eradication methods. Haran was chosen to conduct the training for over thirty officers (a group he described as uniquely enthusiastic and knowledgeable) at a site outside of the conflict zone in Amman, Jordan. He was given just one month to prepare the module.

“It was not enough time. I felt like I was choking,” said Haran, laughing. He needed to spend much of that time reading up on the current Iraqi program and having conferences with Iraqi leadership via Skype. “I couldn’t imagine talking to Iraqis about what’s valid for India or Pakistan, I needed to make it relevant for Iraqis.”

From strategic planning, capacity building, and project design to mobilization, training, and evaluation, you might call Dr. Haran the consummate Heinz College graduate. He fondly recalls interactions with founding dean Bill Cooper, who Haran credits with expanding his interests and making him more flexible and adaptable in his thinking.

Haran humbly suggests that while his Ph.D. gave him credentials and credibility to deal with senior officials, that a path like his would be open to any Heinz College grad with an interest in public health.

“Any bright master's student with a good analytics systems synthesis approach could have done [the work I did],” said Haran.

The polio virus only exists in humans, not animals, and cannot live outside the human body for long, which makes it truly eradicable. So what does it mean to completely eradicate a disease?

To put it simply, eradication will be achieved when the vast majority of the world’s children receive routine immunization on schedule (think 80-90 percent), and that level is sustained for a three-year period during which time disease surveillance validates no new virus anywhere on the globe. Routine immunization will start to feature doses of inactivated polio vaccine (IPV, or the “Salk” vaccine), rather than the live, attenuated OPV.

Haran says it will happen in one day—the whole world will collectively stop giving polio drops. Then, all remaining polio viruses can be contained in a laboratory and destroyed, and a horrible disease will be gone from the planet.

Haran holds his thumb and forefinger an inch apart, smiling. “We are this close.”

For more information about how you can support efforts to eradicate polio, Dr. Haran encourages you to visit www.endpolio.org.

A Story of Progress

As shown in the graphic below, polio eradication efforts were extremely effective in India. 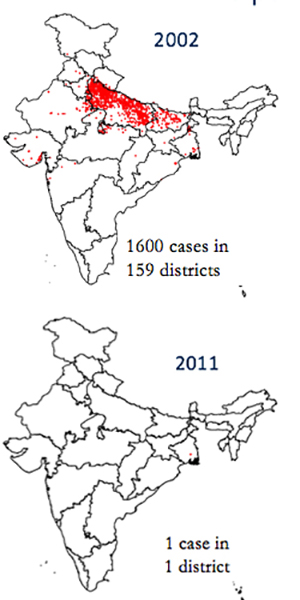