The legalization of marijuana will have huge societal impacts, and Heinz MSPPM and MISM students are influencing policy with new research.

For those U.S. states that have outright legalized large-scale production, marketing, and distribution of cannabis products for non-medical use, there has followed a boom of new commercial markets and products. Where once almost all cannabis in the U.S. was smoked, now in states with legal markets many other forms are common, including edibles, oils for vaping, and dabs—few of which have been adequately researched. Potency has also soared; before the year 2000, the average potency of seized cannabis never exceeded five percent. Today, the average potency of flower products sold in Washington has reached 20 percent, and extracts routinely exceed 60 percent.

Those new markets have promised opportunities, including new tax revenue and the shifting of jobs from under the table to being part of the measured economy, as well as social benefits such as a reduction in the number of people arrested. But with such a huge shift comes enormous policy challenges as well, such as standardization of processes and controls as well as new regulations. For example, there is no suitable roadside test of impairment, so it is difficult to write and enforce laws designed to promote traffic safety. Likewise, it is unclear which pesticides are safe to use on products designed to be burned in the course of use, or what are safe levels of mold in products for general use or medical products intended for use by people with compromised immune systems.

Recently, the RAND Corporation leveraged the expertise of Heinz College Master of Science in Public Policy and Management (MSPPM) and Master of Information Systems Management (MISM) students to analyze the legal cannabis market in the state of Washington. This research project, which ultimately commanded an international audience, contributes to the broader understanding of the societal impacts of how to manage the legal cannabis markets.

Since Washingtonians approved a 2012 ballot measure legalizing large-scale commercial production and marketing of recreational marijuana, the State of Washington has collected data on every legal marijuana transaction through a “seed-to-scale” tracking system, each month generating roughly 5 million unique transactions.

“That’s a lot of data,” said Professor Jonathan Caulkins, a renowned expert on drug policy who served as the students’ faculty advisor. “The State of Washington was very wise to set up this tracking system, it puts researchers in a much more advantageous position and speeds our ability to draw conclusions about these markets.” 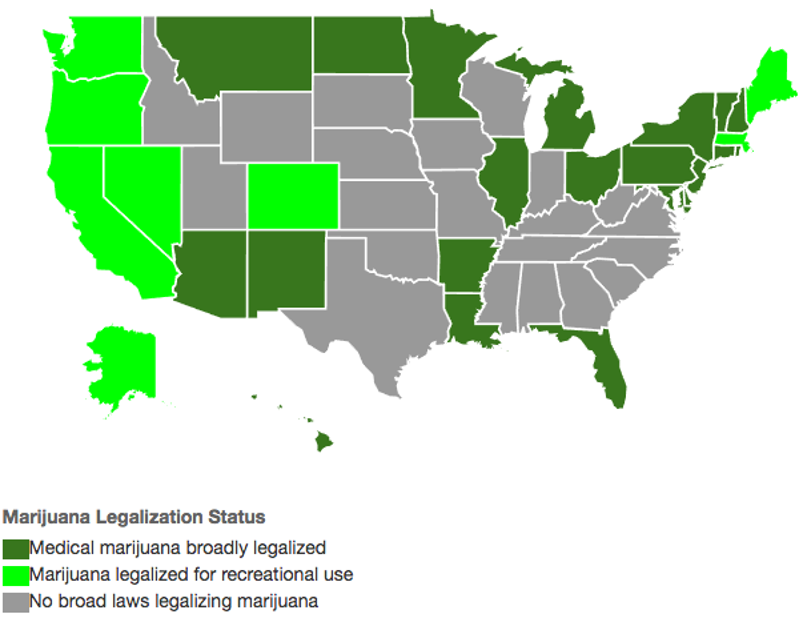 While regulators are still playing catch-up in some respects, the “seed-to-sale” system helps to monitor the paths and relative quality of marijuana flower products, as well as alternative products such as oils, extracts, and edibles. The tool has created a vast amount of data that has yet to be fully exploited.

Making sense of big data is, of course, Heinz College’s cup of tea. Or, in this case, cannabis tea.

In their analysis, the Heinz team mapped out the locations of marijuana retailers in Washington and categorized the various products they sell—more common products like smokeable marijuana flowers and vaporizer cartridges, as well as more obscure product categories like wax, shatter, and kief. Within the transaction data, they looked for seasonal trends, price trends, product trends, and geographic trends, as well as plotted the impact of new entrants into the market on existing retailers.

In terms of product quality, the students found that different product categories are tested for quality in different ways, and producers commonly use multiple testing labs or switch up the labs they contract with. Understanding these dynamics can help regulators create policy that will improve and standardize quality control across the state.

The clarity of categories

The Heinz students used text analytics to group extract products into eight distinct categories. This classification—which had never been done before in a formalized way—will help to further analyze product trends in greater detail.

In addition to product definitions, they recommended improvements to database design, which would lead to better tracking. For example, the students suggested consistent naming conventions for certain product variables like “weight,” “usable weight,” and “potency,” as well as methods that would clarify the relationships between data tables.

The student team was able to recommend refinements for the state’s database that will enable regulators and other researchers to go even further, whether that’s mapping the flow of these products throughout the state, or further segmenting the products into subcategories.

They also discovered that roughly 12 percent of inventory gets removed from the supply chain, but that what happens to that missing product is poorly understood. Future work could dig further into those outcomes.

As an experiment, the Heinz team analyzed sales data in the vicinity of Pullman, Washington, a small town of about 30,000 residents. Pullman was chosen because Washington State University has a campus there, and the “college town” effect they observed was striking.

While sales in cities and in “non-urban non-college” towns followed more regular trends, the purchasing patterns at Pullman retailers varied depending on whether WSU was on break (and its student population in town or not). The “Edibles” category saw a particularly steep decline when school was not in session.

For future work, the students recommended further research into other college towns to see if the finding in Pullman can be generalized.

"The students' work was very impressive," said Caulkins. "This is a domain that tends to attract advocates with agendas, and that makes this kind of dispassionate, evidence-based analysis all the more important."

Students Krista Kinnard, Mary Najewicz, and Lauren Renaud traveled to the ISSDP conference in Aarhus, Denmark to present a paper on their team's research.

New market opportunities created by cannabis legalization is a policy topic that extends beyond the United States, and jurisdictions that experiment with legal sales are being watched with keen interest by policymakers and experts.

The Heinz students now have a voice in that larger conversation, as they were invited to present a paper on their research at the International Society for the Study of Drug Policy (ISSDP) conference in Aarhus, Denmark.

The students’ work made a definite impression at the conference. In fact, the plenary speaker borrowed one of their presentation slides with attribution, exposing their findings to an even larger audience of experts.

"This project was the perfect culmination of all of the skills I learned at Heinz...and the final exam was condensing an entire semester's worth of work into an 11-minute presentation in Denmark at ISSDP," said Krista Kinnard (MSPPM '17), who graduated shortly after the conference. "It was such an amazing experience, and is one of the defining achievements of my Heinz education."