Can Kids Game Their Way to Better Health?

At the intersection of neuroscience, cognitive science, health analytics and gaming, a multi-institutional team of researchers are conducting a global study to determine how AI-powered mobile-VR gaming might help kids develop healthier diet and lifestyle habits. Rema Padman, Heinz College professor of management science and healthcare informatics, is a key lead on this research.

Padman’s team is working with FriendsLearn, a Silicon Valley-based startup with Chennai presence, and their app-based game, Fooya. Billed as “The World’s Epic Food Fight,” the aim of Fooya is to educate and guide players to internalize the multi-dimensional relationship between food, health, and wellness in a fun and immersive way. The gameplay is presented in the style of a third-person shooter in which players control heroes who use food-based “weapons” to combat villainous robots plotting to destroy the player’s health. Players run around the game world to burn calories while dodging unhealthy foods being hurled by enemies, defeating those enemies by throwing food in return.

Fooya is an application of AI in the area of non-communicable disease prevention, which is emerging as a pioneering category of technology known as “digital vaccines,” based on a novel synthesis of neuroscience, cognitive science, and immersive mobile-VR technology.

The game is enabled by breakthrough innovations in machine learning and deep learning techniques, able to personalize the experience for each child depending on their unique demographics. For example, details in the gameplay can change to reflect the child’s individual needs, health-risk for being undernourished or overweight, location, and even seasonal changes in the food the child might encounter. The team emphasizes that Fooya has undergone substantial ethical review, including information security concerns.

Revolutionary applications of AI-enabled science and scalable technology innovations like Fooya can offer enormous positive impacts, not only by improving individual patients’ health but also reducing trillions of dollars in future healthcare spending.

The New Frontier for Disease Prevention

Video games have come a long way from Donkey Kong and Space Invaders. Game consoles have gotten more powerful, multi-player online games have added greater social elements to gaming, and smartphones have transformed the gaming landscape by making games shareable and nimble. A 2011 study by NPD Group found that between 2009 and 2011, the share of children aged 2-17 who played mobile games jumped from 8 percent to 38 percent. Games are an ever-increasing part of life for kids, making them an influential form of media.

Research has shown that playing various types of games including video games can have emotional, intellectual, creative, and many other benefits for young players. One study even found that playing video games—in conjunction with fitness coaching and a step tracker— helped overweight children lose weight, lower blood pressure, and increase their physical activity, among other benefits.

The idea behind “digital vaccines” is to leverage the impact and influence of games by incorporating immersive gaming with neuropsychology and cognitive behavior therapy to help trigger lifestyle habit formation and reduce risk and incidence of diseases.

“Disease prevention technology has been focused on vaccines for infectious diseases, but how can we tackle non-communicable diseases? The burden is now shifting toward heart disease, diabetes, cancers linked to diets, and mental health issues,” said Sri Prakash. “We are now focused on how we can harness the capability of digital technologies as health simulators, to imagine low-risk, low-cost, non-invasive and societal-scale ways of preventing these diseases.”

FriendsLearn recently partnered with the Bloomberg School of Public Health at Johns Hopkins University; the Center for Communication and Change—India; and Professor Padman’s team—which includes Dr. Yi-Chin Lin (Heinz Ph.D. ’15) of Hofstra University and a number of current Heinz College graduate students—to conduct an experiment in Chennai, testing the effectiveness of the game and its association with actual food choices.

“When we compare a group of children who played Fooya to a control group who played a board game, we observe a positive and statistically significant difference in their actual food choices at the end of the game,” said Padman.

By examining clickstream data—that is, the behavioral data generated by users clicking within the game—Padman and her team are looking for patterns that indicate how children engage with the game and what patterns of clicking may point to healthier food choices after playing.

“We’re seeing some interesting patterns in game mechanics and dynamics, such as variations in the number of levels, features played, and range of actions at each level, and associations between those variations and the kids’ actual food choices,” said Lin.

Padman added that even without looking at specific patterns within the game, the team observed that simply being exposed to the game generated some awareness in the children to make better food choices.

Padman notes that further longitudinal studies involving more participants will help to solidify these observations. So far, children have been exposed to the game for 20 minutes during a specific period at school. What would happen if the kids had free choice to play the game whenever they want, for as long as they want? At what point in the game are most kids likely to have learned and internalized what the game is trying to teach them?

Padman and FriendsLearn are now expanding the application of the digital vaccine technology and its analytics platform in partnership with UPMC Children's Hospital of Pittsburgh (CHP) to assess the technology’s impact within a pediatric population of type 1 diabetes patients.

The CHP clinical team includes Dr. Srinivasan Suresh, emergency physician and Chief Medical Information Officer; Dr. Heba Ismail, until recently the Clinical Director of the Diabetes Program and a professor of pediatrics and pediatric endocrinology; Dr. Radhika Mazumdar, Chief of Endocrinology; and Dr. Ingrid Libman, Director of the Diabetes Program. Together, they are studying the longitudinal impact on glycemic events and other biomarkers of risk.

Even the most chronic diabetes patients only spend about 1 percent of their time at the hospital, according to Suresh. Feedback from games like Fooya can give clinicians a window into what’s happening during the other 99 percent.

“The game can help us know more about the disease, about compliance with medications, and other general information so that we can provide better care,” said Suresh.

Ismail notes that there is a gap between health education and the habits of today’s youth. “Food is really important, especially for kids with Type I diabetes. They get a lot of teaching about food, they have to change how they eat, they have learn to monitor insulin, etc.” she said. Ismail noted that current education methods tend to be didactic (ie. lecturing)—retention of the information suffers as a result, and many patients fall back into old habits.

“Since most kids already play games, we thought why not have them do that in a way that is educational? Hopefully we will be able to change their habits and positively impact their diet,” said Ismail. In addition to providing education on healthy dietary choices, Fooya also addresses critical subject matter like ketones and insulin management.

Padman says that the aim is for players to get the hang of the game quickly, and then revisit it often to reinforce learning.

“The idea is to think of it almost as a prescription, as part of a treatment plan. Just like a patient taking a vitamin every day—it’s a similar approach, only they’re playing a game instead,” said Padman. “We think it is a powerful push forward in disease prevention technology.” 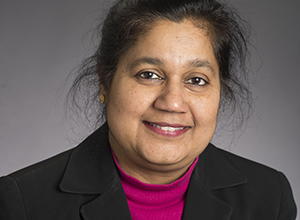