The opioid crisis is a critical public health issue in the United States. While many interventions aim to treat opioid addiction itself, a group of CMU students found a way to identify individuals with high-risk patterns of opioid use before it’s too late.

Prescription opioids, such as oxycodone, or OxyContin, and hydrocodone, or Vicodin, have become increasingly relied upon in the U.S. healthcare system for pain management. For example, you may have been prescribed an opioid following a routine medical procedure—a recent study has found that many high-risk users were first exposed to opioids following a wisdom tooth extraction. Due to the frequency with which opioids are prescribed, the U.S. has seen a dramatic increase in the misuse of these drugs. In fact, of the 72,000 drug overdose-related deaths in 2017, more than 47,000 involved prescription opioids. But what if doctors were able to identify high-risk users before they develop an opioid use disorder?

There is no universal picture of addiction. This means that while prescribers strive to make informed decisions in order to avoid opioid dependence while still treating pain, they cannot always determine who is at a high risk of misuse. Few current tools exist to screen for patients at high risk of opioid use disorder outside of pain clinics, and reliance on clinician gestalt may delay time-sensitive interventions. To this end, a new quantitative approach based on opioid prescription trajectories developed at Heinz College may help clinicians intervene before an addiction even develops.

“Our goal is to use data to try to find people before they have a problem,” explains Wilson Mui (MSPPM ’19). Mui is one of the three Carnegie Mellon University students selected for this project, which was funded by the Deloitte Foundation. His teammates were Nikita Setia (MSPPM-DA ’19), and Riccardo Fogliato, a Ph.D. candidate in the Department of Statistics and Data Science, Dietrich College of Humanities and Social Sciences. Under the guidance of Heinz College Professor Daniel Nagin and Dr. Jonathan Elmer, an Assistant Professor of emergency medicine, critical care medicine and neurology at the University of Pittsburgh, these CMU students developed a data-based approach to identify potentially problematic opioid users as early as possible.

Using prescription data provided by the Allegheny County Department of Human Services (DHS), the team created a predictive model that could project an individual’s trajectory after just a few months of observation. This tool has the potential to save lives, especially in counties like Allegheny, where the rate of opioid-related overdoses exceeds both the state and national averages. For Erin Dalton, Deputy Director for the Office of Data Analysis, Research and Evaluation at DHS, being able to locate high-risk opioid users before they develop a problematic dependence is absolutely critical. “While other strategies allow us to identify people who are already addicted or actively in need of treatment, the fact that this method is preemptive is particularly valuable,” says Dalton, an alumna of Heinz college.

The students synthesized eight years of DHS data into three distinct opioid user profiles: low users, heavy users, and “,” or individuals whose prescription opioid usage starts high but then quickly diminishes over time. These profiles were based on the number and dosage of prescriptions filled on a monthly basis, as well as the changes in this data over time. 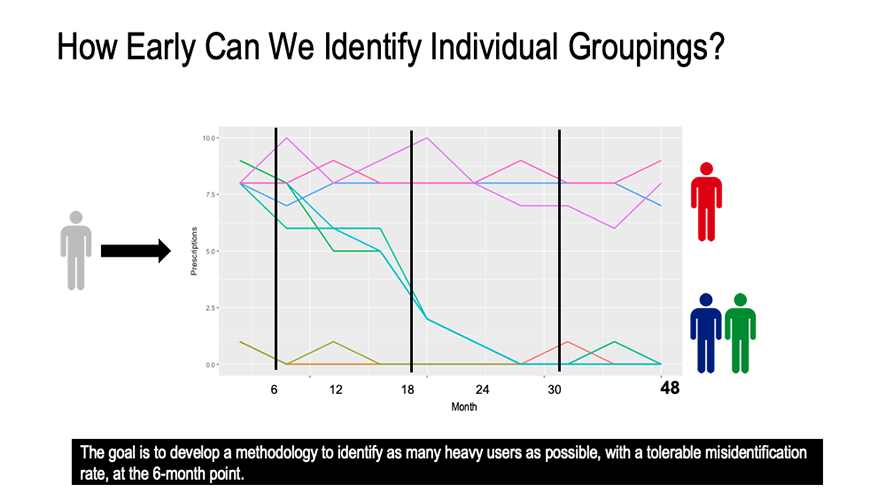 This isn’t the sort of problem that can be accurately captured from purely a policy perspective or an informatics perspective. Its complexity necessitates Heinz’s interdisciplinary approach. Professor Daniel Nagin

“Addiction is a disease, and like any other disease, prevention is always better than treatment,” explains Dr. Elmer. In his clinical role at UPMC, Elmer has directly witnessed the devastating impact of opioid addiction in Allegheny County. “Today, clinicians and families both are often shocked by unanticipated opioid overdoses and death. Although the data we analyzed in this work are available to clinicians, advanced modeling techniques can identify patterns inapparent to the naked eye. By predicting future patterns of opioid use, our hope is to bring clinicians the tools they need to intervene early, modify high risk behaviors and save lives.”

According to the U.S. Department of Health and Human Services, more than 11.4 million people in the U.S. misused prescription opioids in 2016 alone. The White House Council of Economic Advisors found that 2.4 million Americans currently have an opioid use disorder, costing the United States over $504 billion each year.

Nagin, whose group-based trajectory modeling algorithm served as the foundation for the team’s opioid user profiling methodology, maintains that this technique epitomizes the mission of Heinz College.

“This isn’t the sort of problem that can be accurately captured from purely a policy perspective or an informatics perspective. Its complexity necessitates Heinz’s interdisciplinary approach,” said Nagin.

Nationally, opioid-related drug overdoses claim the lives of 115 people (picture most of a Boeing 737) each day. With better than 80 percent accuracy after just a few months of prescription opioid use, the students’ model could help clinicians on the frontlines of the opioid crisis by flagging many high-risk individuals before they develop an opioid use disorder.

This is a big deal, because the “desister” group and the “heavy” group are practically indistinguishable to a human in the first few months of use, making interventions difficult if not impossible. But the algorithm can spot differences. According to Elmer, early identification of individuals that are likely to follow a trajectory of long-term use or dependence provides clinicians with a greater window of opportunity to intervene before patterns of opioid misuse become entrenched.

By catching problematic behavior early, this method could facilitate gentle interventions from clinicians, such as conversations with high-risk patients and prescription strength adjustments, before the issue escalates.

One particularly promising aspect of this work is that it could scale nationally. The DHS dataset at the heart of this study is Medicaid data, meaning that every state has access to the same information. While there is no substitute for a clinician’s presence and discretion, this work provides a more standardized benchmark for high-risk opioid usage.

“This isn’t the end-all, be-all of the drug problem. It’s not a one-stop solution,” says Setia, “but there’s bias that enters into clinicians’ decision making. One clinician’s definition of ‘heavy usage’ may not match another’s. This approach takes that out of the picture, giving standard definitions and letting the clinician handle it from there.”

Currently, the majority of interventions into opioid misuse take place after the patient has developed an addiction. By targeting opioid misuse at such an early stage, this groundbreaking model would help clinicians take a preemptive, intervention-based approach to opioid addiction.

Read more about the MSPPM program