Tiffany Taulton was cold and buying food was a challenge. There was no electricity, internet or cell service in the devastated city she called home. Home, to be clear, was New York City. In the wake of Hurricane Sandy in 2012. New York City was devastated, and Tiffany realized that something needed to change before other communities met a similar fate.

“I felt that climate change was accelerating, and that nobody was going to be spared,” the 2019 Heinz College graduate says. “I just had this sinking feeling in my stomach, because it was just unbelievable that this had happened in New York.”

Working for the United Nations, her job had a little bit of influence on a very grand scale and moved slowly. But Tiffany craved something more direct, more immediate and with a tangible impact on vulnerable communities that were most affected by disasters and climate change. A search for a new opportunity began, and family roots brought Tiffany to Pittsburgh. By chance, she discovered an opportunity to intern at the city’s Department of City Planning and work on the Pittsburgh Climate Action Plan. Noticing her passion for the topic, a coworker taking an environmental policy class referred her to Carnegie Mellon’s doorstep, where she enrolled in Heinz College’s MSPPM program.

“It was really great to be in an environment where people are talking about serious issues and really looking at the numbers,” she says. “People say, ‘We should do this because it's good for the planet.’ But CMU was very much about using the data more effectively.”

CMU graduate work led her to Hazelwood, a former steel town about three miles southeast of campus. In 2019, Tiffany accepted a job as director of community initiatives with the Hazelwood Initiative, a nonprofit focused on opportunities for the area. While Oakland and other nearby neighborhoods thrived, Hazelwood was left out of the progress.

“When I first moved here, looking at the map I saw a greenway, and I thought, ‘This is going to be a great place for me to live!’ But when I went to hike, everywhere I thought I could get in, there was a ‘do not enter’ sign,” Tiffany says. “I later learned that some of those private property signs were fake, and it was public land.”

Access to that greenway became a key project for Tiffany. She led the way on projects to reinvigorate the greenway space and worked with Hazelwood residents to envision its future. She forged partnerships that got the fake signs removed. And working with the City of Pittsburgh, she was part of a team of six partnering organizations that secured more than $400,000 in grants to turn the blighted land into a community asset. Goats were brought in to remove the tall stands of knotweed and heavy vines that were smothering the trees, and new native trees were planted to improve biodiversity. The main trail was stabilized, and a new one was added.

Tiffany led hikes and even snowshoeing ventures to reacquaint the community with the space. City Council approved former Mayor Peduto's request to designate the greenway as an official city park before he left office earlier this year, so it will be supported and maintained by tax dollars in the future.

The project serves as a blueprint for similar initiatives and was recognized in November with a high commendation as a finalist for The Climate Challenge Cup. The international award celebrates civic research partnerships that help communities adapt to extreme weather events and was presented at the United Nations Climate Change Conference.

It’s often communities like mine that have a high percentage of people of color, of low-income people, that don't have trees. They don't have parks, and they don't have access to green space. Tiffany Taulton 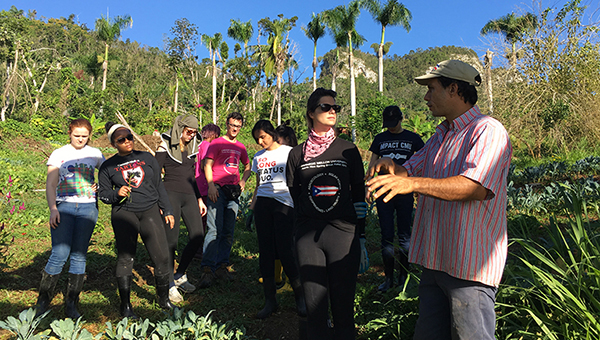 While at Heinz College, Tiffany started 'CMU in Puerto Rico' to connect students with an alternative spring break opportunity to help in the aftermath of Hurricane Maria.

Work in Hazelwood continues. Tiffany serves on Pittsburgh Mayor Ed Gainey’s transition team, focusing on environmental justice (a topic she also teaches at Duquesne University). The next big project is to connect the Hazelwood Greenway to a brownfield on the north shore of the Monongahela River, where a steel mill once operated. The 178-acre riverfront site, Hazelwood Green, will become an innovation zone with mixed use development. CMU’s Mill 19, home of the Advanced Robotics for Manufacturing Institute and Manufacturing Futures Institute are situated there.

Tiffany hopes that new residents of Hazelwood Green and visitors to the riverfront will trek up the hill and into the greenway to enjoy the trails and natural beauty of the space. Or, hop on a bike to explore the new path that connects the neighborhood to the Great Allegheny Passage bike trail. Or, take a stroll to see and support the community’s main business district located just outside of the new development. Whatever the direction, there’s more to see and do, especially outdoors, in Hazelwood.

“It’s often communities like mine that have a high percentage of people of color, of low-income people, that don't have trees. They don't have parks, and they don't have access to green space,” she says. “It's one thing that we're very lucky about here in Hazelwood, that we were neglected to the point where our vacant lots became green spaces.”

Unchecked, neglect is a liability. But Tiffany is doing the work to turn it into an asset.

“My community is not going to be erased by landslides and floods and blackouts. That was the focus [of the greenways project.] It wasn't about what the world thinks of us. I want to make sure we still exist in the future.”