“It’s an exciting time. We’re taking the tradition of stepping and its core principles of teamwork, discipline and commitment to new and exciting places across the globe,” says Lamar, a 2004 graduate, who holds a Master of Arts Management (MAM) degree, a joint program between the College of Fine Arts and Heinz College of Information Systems and Public Policy.

“Stepping is culturally rich connective tissue that binds African American history, dance and storytelling. It’s very accessible. As an organization, we’ve always been very proud that everyone — of any age and from any place in the world — can enjoy and appreciate (what we do).”

No Justice, No Peace

Step Afrika! premiered a new work, "No Justice, No Peace," online in January 2021.

C. Brian Williams founded Step Afrika! in 1994 after a trip to South Africa. It began as an exchange program with Soweto Dance Theatre of Johannesburg and evolved into the first professional dance company focused on the performance and preservation of stepping.

Decades before the nonprofit organization’s founding, the art form of stepping was cultivated in the United States at historically Black colleges and universities (HBCU) by members of African American fraternities and sororities. These teams brought stepping — which uses the human body as an instrument, producing sound in addition to movement — to center stage.

Step Afrika!’s troupe of 16 full-time dancers keep the tradition of stepping alive and well by educating crowds on the history and impact of stepping through major theatrical productions. The dancers maintain an active touring calendar, visiting 40 to 50 cities domestically plus a handful of international destinations each year.

“Step Afrika! takes a tradition rooted on college campuses to the world’s most-celebrated theaters,” Lamar says. “There is no other thing like it. The vocabulary is unique, the meaning behind the movement is unique. It’s specific. It’s singular.”

As a U.S. Cultural Ambassador, Step Afrika! expands diplomatic relations all across the world through performances, workshops and camps. Lamar thinks of Step Afrika! as a global brand ambassador for stepping as a cultural export.

The company’s signature arts education program Summer Steps with Step Afrika! welcomes 200 children for a five-day camp each year. The camp culminates in a performance at one of Washington, D.C.’s most venerable arts venues, the Kennedy Center for the Performing Arts.

“The transformation is truly incredible,” Lamar says. “In less than a week, the same shy kid who walked in with his heads down, struts out of the Kennedy Center with a beautiful sense of pride and swagger.”

I can now see the excellence of the MAM program and the benefits of a data-driven approach and the value of learning a variety of analytical tools, which was such an important part of my training. What sticks with me is the quantitative emphasis and asking the question, ‘How do you let the data drive the narrative?’ Lamar Lovelace

The Path of an Executive Director

While Lamar once studied ballet and jazz himself, he eventually figured out he was better suited for behind-the-scenes work. At Step Afrika! and under Lamar’s leadership, corporate engagement has skyrocketed 400%, and he attributes much of his success to CMU and the MAM program.

“The end goal at Carnegie Mellon is to take your world-class education and matriculate that into a position of leadership,” Lamar says. “You start off specific, you gain experience, you grow, you lead and get to a space where you can manage an entire operation. You fully understand goals, how to track them, measure them and how to move from A to Z.”

“I can now see the excellence of the MAM program and the benefits of a data-driven approach and the value of learning a variety of analytical tools, which was such an important part of my training,” Lamar says. “What sticks with me is the quantitative emphasis and asking the question, ‘How do you let the data drive the narrative?’”

“For me, being an executive director feels like I’ve reached one of the key benchmarks of success, if you will, for what you aspire to be with an arts management degree.”

He is consistently motivated by what he calls “the vibrancy of cause.” Working closely with Step Afrika!’s board of directors, Lamar spearheads fundraising, marketing, operations and long-range planning for the organization.

“There is such meaty work to be done,” Lamar says. “This is a job where you get to use your full self. In my role, I get to be a marketing director, a communications director and a finance director.”

One of his favorite parts of the job is to watch board members’ responses to the shows on tour.

“They get to be part of the standing ovation and cheers from the audience,” Lamar says. “They watch kids clamor to get photos of the dancers in the lobby and witness firsthand the grace and kindness of our performers. They witness the universal joy that Step Afrika! shares all over the world.”

Looking toward the future, Step Afrika! has hired 2020 alumna Margo Cunningham, who also holds a master of arts management degree and serves as the organization’s marketing manager.

“I’m getting to this intergenerational moment where I am essentially a grandfather,” Lamar jokes. “I am impressed by the next generation of arts administrators — they bring a new technological skill set. I’m thrilled to see their leadership skills grow and expand.”
Share 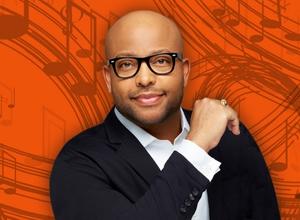