How to Save a Million Pounds of Food...and Counting

“Throughout the world, 40 percent of our food gets wasted, while one [person] in seven goes hungry.”

Leah Lizarondo (MSPPM ’03) is driven by this egregious statistic. The disparity between waste and hunger is what inspired her to co-found 412 Food Rescue, where she also serves as CEO.

“We’re wasting up to 60 percent of our vegetables, I want to give that to people who need it,” she said.

The first full-time program of its kind in Pittsburgh, 412 Food Rescue works with over 175 food providers such as retailers, wholesalers, caterers, and even university dining services to recover food that is healthy and edible but that can no longer be sold. Once the food is collected, it is directly distributed to nonprofit and community organizations throughout Allegheny County in order to best serve individuals who are food insecure.

Incredibly, since its inception in 2015, 412 Food Rescue and its over 1,000 volunteers have rescued over one million pounds of food—that translates roughly to 850,000 meals for individuals and families who are food insecure.

“Despite major cuts to the federal SNAP program…412 Food Rescue has managed to effectively end hunger in our public housing communities,” said Michelle Sandidge, Chief Community Affairs Officer for the Housing Authority of the City of Pittsburgh. Sandidge states that HACP has historically averaged 5 to 7 emergency referrals for families without food each month.

Over the course of the last six months, that number has dropped to zero.

“We attribute this dramatic success to the ongoing efforts of 412 Food Rescue,” said Sandidge.

A hidden problem, and how to solve it

Lizarondo remarks that historically, American society has enabled and even accepted food waste, but that awareness of the problem is on the rise.

As a writer, activist, and entrepreneur, Lizarondo has concerned herself with health and advocacy. She originally pursued a career in technology consulting after graduating from Heinz College, but her passion for food and concern for making a tangible impact on social issues led her down a different path. She spent five years as a food writer, authoring the popular blog Brazen Kitchen for Pittsburgh Magazine as well serving as Editor for NEXT Pittsburgh.

412 Food Rescue combines her passion for food and technology with her desire to combat societal problems. She says that 412 not only combats a huge inefficiency, it also provides nutrition to those in need.

“In a system that’s broken, those most in need of [healthy food] are the ones who can’t afford it,” said Lizarondo. In addition to economics, access is another huge issue 412 Food Rescue is helping to re-shape. Especially due to the Pittsburgh region’s challenging topography, food deserts are a fairly common phenomenon; 412 Food Rescue allows volunteers to deliver food directly to those food deserts—circumventing the lack of transportation access to many areas in need.

Part of what makes this possible is 412 Food Rescue’s innovative use of technology. Their mobile app, Food Rescue Hero, is a tool to organize volunteers and is the first phase of a full technology platform for food recovery.

“I call it ‘micro-volunteering,’” said Lizarondo. “It doesn’t require four hours of your time. In these small bursts, you can do something good.”

We’re wasting up to 60 percent of our vegetables, I want to give that to people who need it. Leah Lizarondo

The app is the first phase of FoodRescueX, a tech platform that will not only schedule and provide food safety training for volunteers, but will also track inventory, catalog tax deductions for donors, and report on environmental impact. The data collected will therefore be a useful management tool for 412 Food Rescue’s partners and allow them to identify ways to reduce waste.

“Our goal is to demonstrate how to scale locally and then replicate nationally, going deep in each city rather than going wide right away,” says Sachal Lakhavani, board co-chair of 412 Food Rescue and founder of Pittsburgh startup Srvd.

Recently, 412 announced a partnership with car-sharing network Zipcar as well as Healthy Ride, the region’s first bike-sharing program—the services provide volunteers with free hour credits for their vehicles and bikes, respectively. These partnerships are crucial to 412 Food Rescue’s ethos—individuals who do not own a vehicle can still volunteer as a food rescuer.

“[It gives us] the opportunity to come closer to our goal of saving 3 million pounds of food in our first three years,” she said.

As if its core efforts weren’t enough, 412 Food Rescue has been launching new programs left and right, all with the aim of raising awareness about food waste and increasing their social reach. The company started an initiative called UglyCSA (“Pittsburgh’s first CSA for rebels and misfits,” according to their website) which allows consumers to buy shares of local produce that likely wouldn’t sell at a grocer or farmer’s market strictly for cosmetic reasons. Lizarondo comments that buying an 8-week share of produce through UglyCSA saves 1130 gallons of water.

“That’s enough drinking water for one person for six years,” she adds. 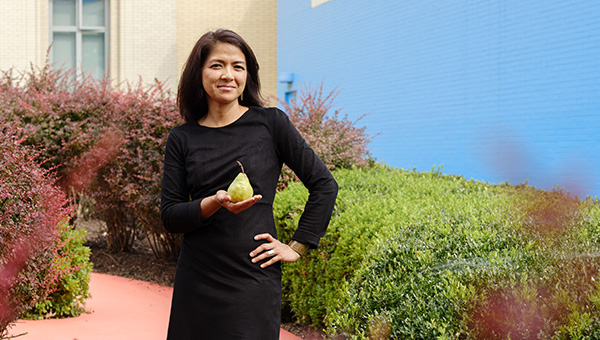 The Impact of 412 Food Rescue

412 Food Rescue has saved over one million pounds of through it's innovative use of technology, volunteers, partnerships, and outreach.

Then there’s Hidden Harvest, an effort which rescues apples from unharvested trees in the city—both public and private. 412 Food Rescue donates many of the apples to their partner organizations, but some can’t be salvaged as food. This year, 412 partnered with Wigle Whiskey—another concern powered by several CMU alum—to create a limited edition pommeau from the most bruised apples.

“[Pommeau] is not something you see very often, that you’re only going to find if you’re in Normandy or these agricultural regions that are reliant on apples,” said Jill Steiner, Director of Events and Public Relations at Wigle Whiskey. After considering more straightforward products like cider and apple brandy, the distillers at Wigle thought that a pommeau was the best way to capture the many complexities of the foraged apples. The crop yielded 200 bottles of the liqueur, called FORAGED, which is being sold on Wigle’s website as well as its Strip District location.

“There’s a lot of overlap in the goals and the approach that both 412 and Wigle, wanting to utilize and repurpose local ingredients,” said Steiner.

412 also recently put out word on social media that they were looking to partner with a local brewer. They quickly got a bite.

“412 Food Rescue is a fantastic cause, and something near and dear to our hearts, we strive to be a zero-waste facility,” said Scott Smith, founder and brewer at East End Brewing Co. 412 and East End collaborated to create LOAF, a craft beer made from stale bread. Smith describes the beer—which East End brewed a 20-barrel batch of and is currently selling by the glass and growler—as a pale ale with a “bready note.”

(Proceeds from both the Wigle and East End collaborations benefit 412 Food Rescue.)

For Lizarondo, the training she received at Heinz College prepared her for the work she does as a community leader and social entrepreneur, merging technology and innovative partnerships with a human-centered approach to problem-solving.

“[At Heinz], I learned a lot about program evaluation, GIS, and operations research, all of which I’m using right now for 412 Food Rescue,” said Lizarondo.

Lizarondo hopes to inspire people to realize the immense impact that they can make in their communities by focusing on food waste as a major area of policy.

“There are a lot of possibilities for young leaders to directly contribute,” she said. “You can make significant change right away, and I think that’s an exciting thing.”

For the people and organizations 412 has served, that excitement hits home, especially this time of year.

“Because of [412 Food Rescue], we did not have any issues this Thanksgiving and I anticipate the same for the upcoming Christmas holiday,” said Sandidge. “They have been a blessing.”

The Food Rescue Hero app is free and available now through the iTunes App Store and on Google Play.