Two recent graduates of Heinz’s MSHCPM program are working to bring their stroke detection technology AlphaStroke, which will save 8,000 lives a year, to market.

Stroke is one of the most debilitating diseases in the world and the fifth cause of death in the United States, according to the American Stroke Association. The sooner a stroke is identified, the better the chances a stroke victim has of being properly treated and recovering completely.

“Most of the time, this is because first responders don’t have reliable and effective tools for diagnosing stroke victims,” explained Matthew Kesinger, a recent graduate of the Master of Science in Health Care Policy and Management (MSHCPM ‘17) program at Heinz College.

A delay in stroke detection means a stroke victim could be taken to a hospital that is not equipped to treat them. Only one in seven hospitals in the U.S. is a certified stroke center, meaning that of the 800,000 patients who suffer from stroke every year—about half—are taken to the wrong hospital.

In urban areas, a misdiagnosed stroke means a stroke victim will have, on average, a two-hour delay before they receive proper stroke treatment. One of the standard treatments for an ischemic stroke—when a clot blocks a vessel supplying blood to the brain—is tPA, a clot-busting drug. tPA needs to be administered to a stroke victim within three hours for it to effectively dissolve a clot.

The stakes are even higher for patients in rural areas, where hospitals are fewer and farther apart. There, misdiagnosis and delay could mean extreme debilitation or death.

“Say I’m an EMT in southern West Virginia. I have a community hospital 10 minutes away, and my closest-stroke center is a three-hour drive or more. If I could put a device on my patient and it says, ‘Stroke,’ I’m going to be able to get that patient to the right place via helicopter intercept,” explains Kesinger. “The amount of value increases the further you get from an urban environment, because of the relative time that can be saved.”

Kesinger knows from experience. Before coming to Heinz, he spent years as an EMT and then matriculated to medical school at the University of Pittsburgh. During surgical rotations in 2014, he was exposed to different types of technology and had an epiphany: why not design a small device that could aid first responders in accurately diagnosing a stroke victim?

Kesinger and his co-founder Dan Willis, an electrical engineer, incorporated Forest Devices in April of 2015 with Kesinger serving as CEO. Their mission was to develop AlphaStroke—the “EKG” for the brain.”

AlphaStroke: the EKG for the brain

AlphaStroke works in a similar way: a small device that attaches to a patient’s head via a band and a few electrodes. If a first responder suspects that someone is suffering a stroke, they could attach AlphaStroke to the patient and simply press a “SCAN” button on the device. Within 60 seconds, AlphaStroke would measure asymmetry in brain oxygen and determine whether the victim is experiencing a stroke. Detection that rapid could save lives.

Improved patient outcomes are a good enough reason to invent something like AlphaStroke, but the potential value of the technology extends across the health care sector. 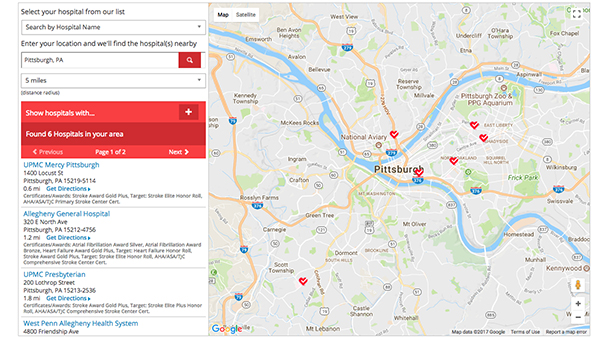 Know Before You Go

Only 1 in 7 hospitals is a Certified Stroke Center. This interactive map from the American Heart Association will help you find the nearest one.

Ineffectiveness at diagnosing stroke costs the health care industry an additional $20 billion a year in transportation, hospitalization, and long-term care. And the overuse of 2 million CAT scans in emergency departments leads to $1 billion in waste, while exposing patients to needless radiation.

Kesigner and Willis had the medical and technical expertise to develop the technology behind AlphaStroke. But Kesinger admitted that they lacked the business acumen to effectively market the product and raise funds to build a prototype.

“We are a very science-focused company. That’s my background,” he said. “I didn’t mean to ever become a CEO. I’m at Heinz because I accidently became a CEO, and I needed somebody to teach me how to run a medical device company.”

While at Heinz College, Kesinger met another key player on the Forest Devices team, Carmelo Montalvo (MSHCPM ’17). The two became acquainted during Admitted Students Weekend prior to the start of their first year, and were later formally introduced by James Jordan, their Health Care Systems professor and MSHCPM program director.

Montalvo joined the company, and is now Director of Operations and Human Resources for Forest Devices.

A big showing at the Rice Business Plan Competition

The depth of knowledge and analytic skill that Kesinger and Montalvo gained at Heinz had an additional benefit: it helped them make a splash at the annual Rice Business Plan Competition (RBPC). The RBPC, which is the largest graduate-level startup competition in the world, took place in Houston this past April.

Nearly all of the 300 judges deemed Forest Devices to be the best investment opportunity, awarding Kesinger and Montalvo first place in the competition and nearly $600,000 in total prizes to further develop AlphaStroke. That success is a gamechanger in more ways than one.

“We can get to the next milestone now without doing more fundraising. We are able to develop new things, new techniques, strategies, and actually reach out to future funders a year or two in advance,” said Kesinger when asked about the impact of RBPC on AlphaStroke.

“We had inquiries about our business that weren’t there before,” said Montalvo. “That was very humbling and awe-inspiring because that meant people really believed in what we were trying to do for these patients.”

After their triumph at RBPC, Kesinger and Montalvo returned to Pittsburgh to finish the MSHCPM program and walk for Heinz College’s graduation ceremony in May, where Montalvo was selected to be the commencement speaker by the Heinz student body. Montalvo said that being selected by his peers to deliver the speech was among the biggest honors of his life.

“It was exciting,” he said, “And most of all, it made my family extremely proud. That part meant more to me than anything.”

Building the future of health care in Pittsburgh

Kesinger says that it was no accident that Forest Devices was founded in Pittsburgh. He remarks that it’s not just the city’s exceptional talent pool, affordability, and culture of innovation in healthcare and tech. He also credits the city with a refreshing lack of pretense.

“The city’s culture is our culture. I remember the reason I chose to come to Pittsburgh was the people. You could go to a smoky bar on Polish Hill on a Tuesday night and hang out with one or two Nobel laureates.”

For Forest Devices, they are poised to become a part of that culture themselves. After a successful feasibility trial last June, the company plans to conduct several more pivotal trials in the coming years, with the target that AlphaStroke will move to revenue by 2020.

But for Kesinger, Montalvo, and the rest of the Forest Devices team, bringing AlphaStroke to market is about much more than economics. It’s personal.

“Our vision is to fundamentally change the way that stroke patients receive care,” said Kesinger. “It gives people goose bumps.”

Learn more about the MSHCPM Program 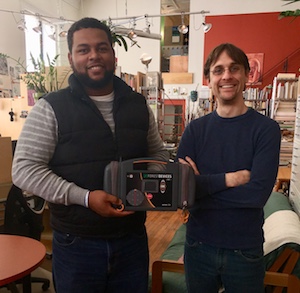 Taking On a Leading Cause of Death